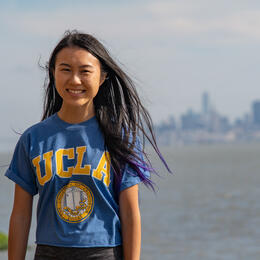 Birds are singing, wildflowers are blooming, and spring is quickly approaching in the northern hemisphere. Breeding season for birds will be in full swing in the upcoming weeks. Though many species fiercely defend individual breeding territories, some birds, like Caspian terns, prefer to establish breeding colonies.

Caspian terns are the largest tern species in the world and migrate from Central America up to the San Francisco Bay in spring to breed and fish in the beaches.¹ Historically, over half of the Pacific coast Caspian tern population bred in the San Francisco Bay in the 1950s.² Much of this population has moved to the Columbia River Basin where they inhibit conservation efforts by preying on endangered salmon species.³ Caspian terns further saw a 30% decline in the San Francisco area since the early 2000s, largely due to habitat loss and mammalian predation.⁴ Many breeding pairs of Caspian terns once resided in the manmade San Francisco industrial salt ponds which are now being restored to be tidal marshes.⁵ Pairs from these colonies were successfully relocated to other islands using painted decoys modeled to imitate incubating terns combined with playback of tern colony recordings.⁶ This was also an effort to attract terns back to the San Francisco Bay, where a smaller proportion of their diet consists of salmon, and away from the Columbia River.⁴

At the Richardson Bay Audubon Center, Caspian terns are one of the most common birds spotted on the nearby Aramburu Island, but there has never been an active breeding colony observed. Restoring this dredge spoil island has been an ongoing project for years, with staff and volunteers planting native plants and removing invasive plants regularly. The western shoreline has been reconstructed with sand, rock, and shells to prevent erosion, which also serves as nesting substrate for the terns. Additionally, there are few mammalian predators on the island which makes it a safer breeding habitat. The hope is to start a new colony on this suitable habitat in spring by attracting terns with decoys.

The Richardson Bay Audubon Center staff ordered 24 plain decoys and traced them to resemble Caspian terns. They worked with high school Audubon Youth leaders to paint these terns and they have been placed on the east beach of the island to replicate previous tern relocation efforts.4 A sound system has been set up and programmed to play tern colony calls on loop as a social auditory signal for wild terns. There is a fence surrounding the area to signal visitors and volunteers to not disturb the decoys and potential nesting area. If all goes well, there will be breeding pairs of Caspian terns on the island in a few weeks!